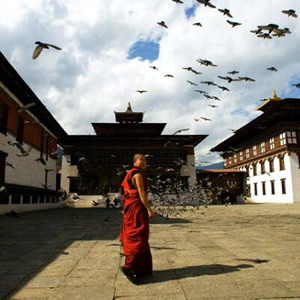 Tucked into the Eastern Himalayas and landlocked by China and India, Bhutan was isolated from the rest of the world until its launch of “tourism” in 1974. While total seclusion may seem harsh and restrictive to some (television has since arrived), the country has been deemed one of the happiest in the entire world (8th to be exact.)

Every aspect of Bhutan travel is unique, yet slightly complicated.

From obtaining clearance to visit and landing into the world’s most difficult commercial airport (Paro) to reaching the country’s most famous landmark… by 3-hour trek, there’s nowhere in the world that’s quite like it.

Whether soaking in the breathtaking, virgin landscapes, sitting privately with spiritual leader, basking in the smiles & slow pace of local living or unwinding under traditional hot stone treatments, your time in the Land of the Thunder Dragon will be truly ethereal.

Taiwan
Business, industry & booming cities or pristine coastlines, lush national parks and natural marvels? When speaking of the island nation of Taiwan, both categories prove to be true.

Despite being one of the world’s most densely populated countries and having one of Asia’s top flourishing economies, this Pacific island nation has almost as many natural wonders and outdoor attractions as it does manmade draws. From the Taipei 101, vibrant capital streets and all-night entertainment to the Qingshui Cliffs and the world’s largest naturally enclosed space- a trip to Taiwan truly covers all ends of the spectrum.

Voyale has planned an inimitable journey that will undoubtedly evoke the best of the country.